The judiciary has a primary responsibility to deliver justice for all and curb corruption, contributing to achieving two fundamentals targets of the Sustainable Development Goal 16 on Peace, Justice and Strong Institutions.

With the 2030 Agenda for Sustainable Development, judiciaries from around the world are called to join forces and support each other in developing mechanisms that help deliver justice for all. This can be made possible through initiatives fostering transparency, promoting integrity and increasing public trust without impeding the independence of the judiciary at the same time.

Corruption and lack of integrity in the judiciary are major impediments to justice delivery and the achievement of the Sustainable Development Goals. According to Transparency International’s Global Corruption Barometer 2017, citizens around the world perceive the judiciary as one of the most corruption-prone sectors, with 30% of the respondents believing that most judges and magistrates are corrupt. The poorest and most marginalized citizens are the ones who suffer most, as they are less likely to pay bribes and have limited access to influential networks. Besides hampering public confidence in the institutions and undermining stability in fragile contexts, corruption and lack of integrity in the judiciary also constitute a human rights violation.

If this perception is wrong and influenced by scandals and isolated cases, judiciaries still need to work to correct this perception, and they can do it by embracing initiatives to promote transparency, integrity, community engagement and open justice.

UNDP is supporting judiciaries in ASEAN to promote transparency, integrity and accountability and to fulfil their obligations under article 11 of the United Nations Convention against Corruption.

As part of the projects Judicial Excellence to ensure Justice for All: The Judicial Integrity Network in ASEAN, supported by the U.S. Department of State's Bureau of International Narcotics and Law Enforcement Affairs (INL), and Promoting a Fair Business Environment in ASEAN, supported by the UK Government under the Prosperity Fund and the ASEAN Economic Reform Programme, UNDP is nurturing the Judicial Integrity Network in ASEAN, which supports target countries in pursuing judicial reforms, focusing particularly on transparency, accountability, integrity, accessibility and court excellence, and promoting knowledge exchange and peer-support.

Main objectives of the second phase of the Project:

A Transparent and Accountable Judiciary to Deliver Justice for All 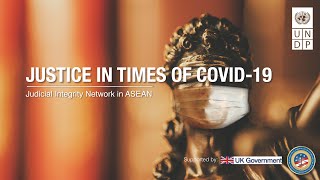 UNDP Around the world